A backhoe loader, or simply “backhoe,” is a heavy equipment vehicle that is often used in urban engineering and construction. It is commonly used for: Excavation, Demolition, Paving roads, Landscaping, Breaking Asphalt and Other construction uses.
Because of their relatively small size, backhoes are especially useful in construction and repair projects where the area may be too small for larger equipment. Many companies have found improved productivity and lower heavy equipment operating costs when using backhoes leading to their popularity in the construction industry.

Backhoes were based on tractors and so they have a tractor-like vehicle compartment; however, they are unique in assembly because of the loader bucket Don the front and the rear actor attached to the back of the machine. The rear actor consists of a digging bucket on an articulated arm. The portion of the arm near the cab is the boom, and the portion that is attached to the bucket is the stick.
In addition to the loading equipment, backhoes often have swivel seats within the cab so the driver can pivot to operate the needed tool. Most backhoes also use stabilizer legs or hydraulic outriggers for additional stability when digging. Loader buckets are usually replaceable with different attachments used for construction such as a grapple, an auger, a stump grinder, or a breaker. These add-ons provide greater versatility for construction, demolition, and landscaping projects, and is another reason for the popularity of the backhoe. 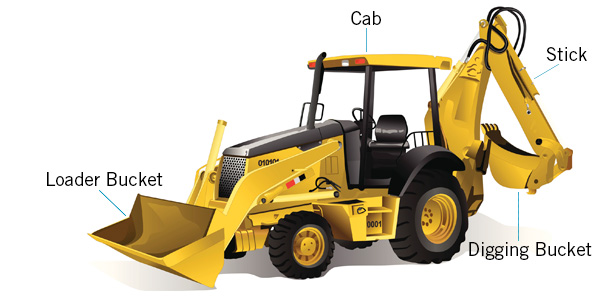 When comparing manufacturers and models, the strength lies in its attachments and capabilities—how deep they dig, how wide the buckets are, the operating weight, and the emission rating.

It is important to understand the scope of the project, or future projects, and dig depth before investing in a backhoe. Models have a wide range of digging capabilities—between 7 feet and 60 feet—but the most popular models dig between 14 feet and 17 feet.

The operating weight for backhoes typically range from 13,000 to 24,000 lbs. and depends entirely on the scope of the project. The environment in which the machine will be operated is the determining factor in the weight of the backhoe.

Manufacturers are required to comply with federal and state emissions regulations that are currently in effect. To this end, it is important to make sure the backhoe conforms to these standards by providing an IC engine that follows the specific EPA laws.

There are several popular manufacturers in the backhoe market including John Deere, Caterpillar, CASE, JCB, and New Holland. 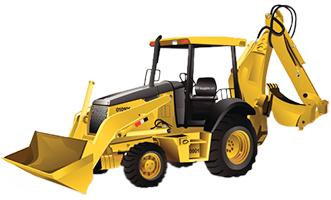 Looking to compare backhoe models side-by-side, from either the same manufacturer or competing manufacturers? RitchieSpecsallows you to compare the dimensions, specifications, and operational aspects of over 200 backhoe models. Once you’ve found the backhoe loader model that fits your needs, browse backhoes for sale on IronPlanet and Ritchie Bros Auctioneers.